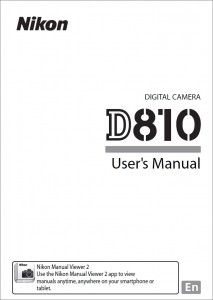 Of special note are the Bracketing options now include 2 and 3 stops per frame. With up to 9 bracketed frames available, the exposure range is now up to 27 stops!

You can also view the D810 Digital Brochure online.

The D810 is produced in Ayuthaya, Thailand.

What is the new i-button on the back of the Nikon D810 camera?

The i-button is a Secondary Info button. It allows quick access to most-used camera settings. Pressing the i-button brings up the options in the viewfinder display and LCD. You can change settings using the directional pad and OK button. In playback (image review) mode, it will bring up the retouch menu.

Where can I get the Nikon D810 instruction manual and brochure?

You can download to the Nikon D810 user’s manual PDF here. You can also view the D810 Digital Brochure online.

When will the D810 be released?

What is the Zebra Stripes feature on the D810?

The Zebra Stripes (Highlight Display) feature shows areas of highlight that are subject to overexposure during video recording in Live View mode. Avoiding overexposure is important because all details in these areas will be lost. Due to the nature of video, it is not possible to recover these lost highlight details as compared with RAW still image processing.

Does the Nikon D810 have focus peaking?

Focus peaking is not a feature of the Nikon D810. The Zebra Stripes (Highlight Display) feature is not focus peaking.

The New Nikon D810 will be announced soon. More details to follow.

News and Information about the D810 Nikon Digital Camera